Me waiting for the latest SEO tactic to kick in.

“SEO takes a while” is something that I hear quite a bit.

But what if there was something you could do today, that takes less than 30 seconds per article, that would boost your SEO?

Don’t believe me? Look at this:

This is one of my sites that I run to experiment on.

On this site, many of the articles have dates in the titles (specifically, the year). I started this in 2018 as experiment #1.

Will adding dates to the titles increase click through rate from Google? Will those increased clicks, or simply just adding the date, increase the rank of the article?

Which was great, because what I really wanted to try was the next experiment.

I wondered, if I left the titles as 2018, would traffic tank in 2019. so I left them, and you know what? Traffic dropped right off the map about midway through the year. 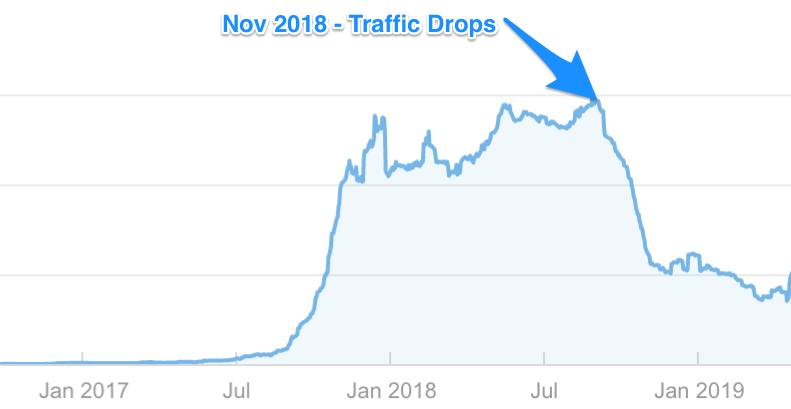 Nobody wants to click on an old blog post and if there’s a search where Google feels newer information is better, you aren’t going to rank.

But here’s the BEST PART.

So at this point, the publish dates (in WordPress) for these articles were 2017 and the titles said 2018.

I wondered: If I don’t change anything in the content, and simply update the titles to say 2019 AND change the publish date to say 2019…

So again, in this experiment (and I say experiment because this is spammy and don’t do this), I didn’t change a single word of the content so I could isolate the variables.

And you know what happened? Traffic started coming right back. CTR went up from search and all of a sudden my site was back!

It seems like Google totally ignores the “modified” data point that exists in WordPress and only looks at the publish date.

Look, I’m ALL for “writing for humans” but sometimes you have to communicate with a computer the way they want to be communicated with, and that means updating your “published” date whenever you update your articles.

Still not sure this works?

I tried it on another site. Let me guess if you can see where I made the updates to the publish dates:

Your takeaways today should be this:

Or just be a spammer and only update the publish date without changing any of the words, haha.

I won’t judge you.

Want a constant flow of relevant traffic to your site?

Maybe it just means you can charge more or land your dream job.

That’s what an essential knowledge of SEO can do for you.

I'll show you how with a short email every Tuesday.